Bedrock Brecciation During Rapid Deglaciation of the Avalon Peninsula

Glacially-sculpted bedrock outcrops are abundant on Newfoundland’s Avalon Peninsula.  Many of these bedrock outcrops are glacially smoothed and are largely intact while others have been distinctly roughened or severely disrupted by ice.  Ice-disrupted bedrock is of particular interest because observations of rock breakage patterns can provide key evidence of past climatic conditions and associated glacial activity.

In two particular areas, the Isthmus of Avalon area and the Heart’s Content Barrens area, atypical patterns of breakage and displacement of bedrock appear indicative of sudden climate change at the end of the last glacial period.  Specifically, ice-disrupted bedrock outcrops show evidence of subglacial brecciation that, in many respects, resemble occurrences of subaerial bedrock frost heave.  This atypical mode of bedrock brecciation was apparently caused by rapid deglaciation and accompanying depressurization of groundwater confined beneath frozen subglacial bedrock.  The record of subglacial brecciation is distinct and recognizable because bedrock in the affected areas is well exposed, highly resistant to Holocene weathering and heavily disrupted by late-stage glacial action.

At the time of the last glacial maximum (LGM), approximately 25000 years before present (BP), the entire Avalon Peninsula and adjacent offshore areas lay under glacial ice that was 100’s of meters thick.  At LGM and through most of the Pleistocene, the glacial ice cover was temperate at depth.  Temperate conditions result when a blanket of glacial ice is sufficiently thick to insulate bedrock and allow geothermal heat flux to bring the basal ice to the melting point.   Frictional heating from ice movement can augment geothermal heat.   Evidence for warm-based glacial activity is found in bedrock features that have been smoothed and streamlined by basal-sliding glacial erosion.  Such features are common on the Avalon Peninsula.

About 14700 years BP, a sharp warming trend (the Bolling Allerod interstadial) caused rapid thinning of North American ice sheets.   About 12900 years BP, glacial-period climate conditions suddenly returned to Newfoundland with the onset of the Younger Dryas stadial.   In one of the leading theories developed to explain a rapid descent back into glacial conditions, meltwater resulting from thinning of the Laurentide ice sheet interrupted the Atlantic meridional overturning circulation (AMOC).  This slowed ocean heat transport from the tropics to the surface waters of the North Atlantic.  The Younger Dryas cold period lasted until 11700 years BP and was followed by very rapid climate warming (presumably caused by a restart of the AMOC), concluding in conditions approximating those of the Holocene today.

It can be reasonably postulated, although without direct evidence, that ice sheets overlying the Avalon Peninsula thinned substantially during the Bolling-Allerod and then remained static or began to rebuild during the Younger Dryas.  With the thinner ice cover and the drop in average surface air temperatures accompanying the Younger Dryas, basal glacial ice converted from a temperate condition (water/ice equilibrium) to a cold condition (ice below the melting temperature).

The conversion to cold ice might have occurred primarily via thermal conduction, although advection would accelerate the process.  Based just on thermal conduction and with an average annual air temperature of -10 degrees, less than 50 years is needed to cool a uniform temperate ice column to -2 degrees at 100 meters depth.  This calculation assumes that the initially temperate ice had minimal liquid water content.   With a water content of 1%,  the 100 m ice column would take about twice as long to reach -2 degrees at the base.

Direct evidence for the transition to cold-based glacial conditions in the Isthmus of Avalon area and the Heart’s Content Barrens area is provided by patterns of bedrock erosion.  Upward displacement of bedrock fragments (usually joint blocks) is common in both areas.  Displacement of joint blocks upward (often vertically) from substrate is a critical indicator of action that cannot be attributed solely to the movement of glacial ice.  The upward displacements resemble periglacial frost heave occurrences, except that in many instances the displaced fragments have been further rotated or translated by side-loading.  The side loading implies that glacial ice remained present while bedrock fragments were being displaced upward.

Upward displacement of bedrock, either by hydraulic action or by ice crystal growth pressure, requires a cold-ice environment to seal leaks and/or remove heat of crystallization.   Evidence from large upward-displaced blocks found on the Avalon Peninsula suggests that cold conditions penetrated as much as 3 meters deep into subglacial bedrock during the Younger Dryas.

At the end of the Younger Dryas, an abrupt change to a warmer climate occurred on the Avalon.  This climate change led to rapid and complete deglaciation even as the depleting ice cover remained cold-based.  Rapid warming at the surface of a cold-based glacier will cause accelerated ice loss but will not quickly produce a warm-based glacier.  Surface ice temperatures cannot exceed zero degrees, slowing conductive heat flow from above even when air temperatures are many degrees above zero.

While abrupt climate warming will not tend to create temperate glaciers from cold glaciers, the thinning of ice caused by fast warming will cause a rapid decrease of hydrostatic pressure at the ice-rock interface.  This pressure decrease creates an overpressure condition in an aquifer confined beneath frozen bedrock.

The combination of groundwater overpressure and frozen permeable bedrock is a principal cause of rapid and intense bedrock brecciation during deglaciation.

Pressurized groundwater can fracture and shift bedrock directly by hydraulic stress.  Alternatively, with an adequate thermal gradient, water can freeze in porous bedrock and convert heat to mechanical energy through crystal growth pressure.  This latter mode, resembling periglacial bedrock frost heave, is the dominant mode of subglacial bedrock brecciation on the Avalon.

Pressurized groundwater generates characteristic and recognizable features of subglacial brecciation in frozen bedrock.  The characteristic features are found only at locations where host bedrock is both porous and permeable.  The present-day recognizability of pre-Holocene rock breakage is enhanced  when bedrock is highly resistant to Holocene weathering that could otherwise obscure 11000 year-old brecciation features.

Most of the rock on the Isthmus and on the Heart’s Content Barrens is of Ediacaran age.  The bedrock  in both areas is well indurated and appears highly resistant to erosion under Holocene conditions.  The rock shows little susceptibility to freeze-thaw weathering and typically erodes by dissolution in rainwater at a rate comparable to the erosion rate of exposed hydrothermal quartz.  Soil formation from the rocks is poor, as evidenced by the general lack of vegetation in many areas.

Folding of the bedrock has introduced joint systems that help to render the rock water-permeable.  Groundwater can migrate along joints and also along the boundaries between bedding planes in thickly bedded sloping structures.  The permeability of Avalon bedrock has likely been enhanced by repeated loading and unloading over hundreds of thousands of years of glacial cycling.  Bedding plane boundaries and large-scale longitudinal joints provide the principal pathways for deep groundwater penetration.

2)  Local areas of intensely brecciated bedrock incorporating mounds of loose blocks.  Mounds typically remain partially anchored in bedrock and overlie the cavities from which they were ejected.  Blocks show correlations between adjacent angular fragments. These correlations differentiate them from till where fragments are distributed more randomly.

4)  Remnant cavities (cavities left behind when bedrock fragments are ejected from substrate and then glacially transported away).  Often, remnant cavities are elongated and resemble fissures.

All of the above-listed characteristic features can be observed over wide areas of the Isthmus of Avalon and the Heart’s Content Barrens regions on Newfoundland’s Avalon Peninsula.  Observation of all of these features, frequently seen in combination, supports the theory that rapid deglaciation at the end of the Younger Dryas stadial was a significant factor affecting the bedrock geomorphology of parts of the Avalon.   Evidence suggests that bedrock brecciation by rapid deglaciation was not a one-time occurrence on the Avalon Peninsula.   Recurrent instances of subglacial bedrock brecciation, separated by intervals of basal-sliding glacial erosion (implying re-glaciation), are indicated at several locations.​​ 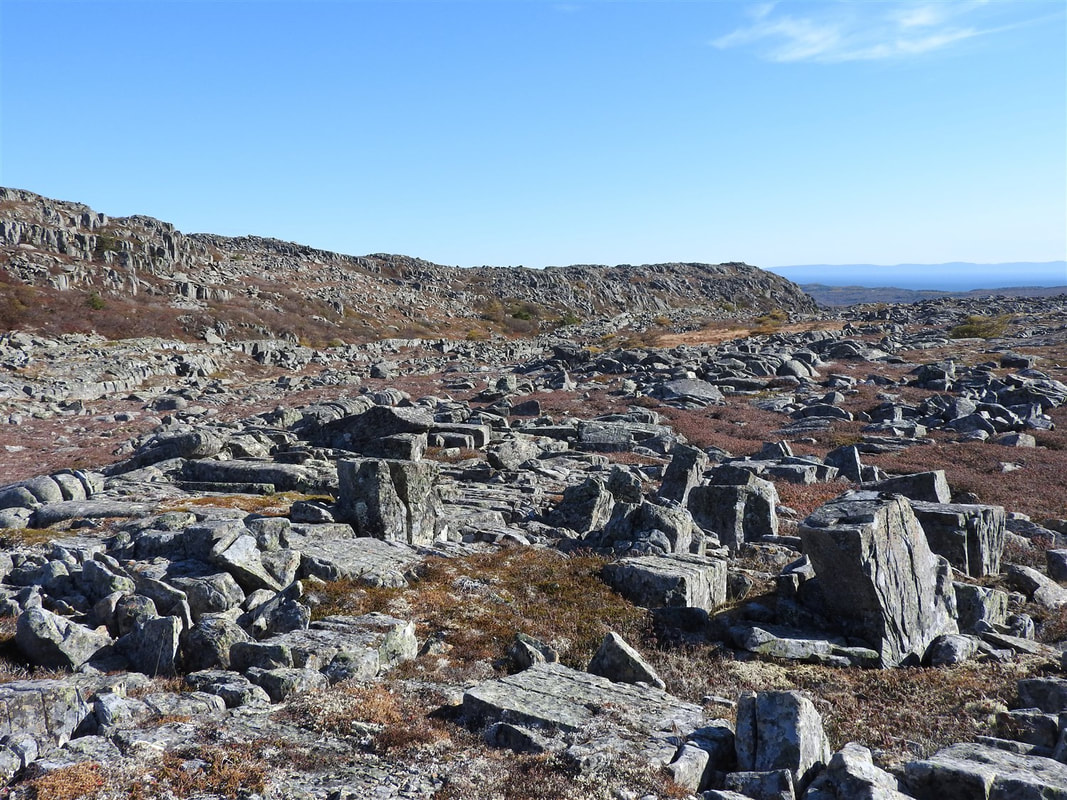