The name Avalonia describes an ancient land mass that , for a long time, existed as a large island or group of islands far from the earth's other continents, thereby forming a small continent in its own right.  Avalonia has been drawn by geologists on paleomaps, or  maps of the earth as the planet might have appeared millions of years ago.  Avalonia has had a long and complex history, still in progress.  Evidence suggests that pieces of  the former Avalonia are recognizable at the present time and if you're from Newfoundland or Wales or Rhode Island or many other parts of Eastern North America, Western Europe or North West Africa, then you're potentially living on or above Avalonian rocks.

Over geologic time, the map of the earth has changed continuously and radically as a thin crust of hard surface rocks (continents, islands, ocean floor) has been created, destroyed, rotated and relocated. This process is guided by a complex system of slow moving currents in the thick underlying heat-softened and pressure-driven rocks of the earth's mantle.   This unceasing action, dictated by the principles of plate tectonics, led to the beginnings of Avalonia as much as 1200 million years ago, then to its long solo journey as a microcontinent or terrane and finally to its collision, assimilation, breakup and scattering.

A billion years ago, the earth, with no visible plants or animals, a surface of water, ice and bare rock, and an unfamiliar geographic arrangement of continents and islands, would easily be mistaken for an alien planet.  An ancient supercontinent, Rodinia, comprising most of the earth's above-sea-level surface, was slowly dividing, leaving among its largest fragments the paleocontinent, Gondwana.  In the south, far below the equator, off the northern coast of Gondwana, Avalonia began to form as an arc of volcanic islands.  Such volcanic arcs form when a section (plate) of dense ocean-floor rock is forced against and ultimately beneath, a less dense adjoining  plate.  Hydrated minerals in the descending (subducting) plate are heated at depth, releasing moisture which then rises, causing melting of the overlying rocks and ultimately, volcanic activity at the surface.  The Aleutian Islands, off Alaska, provide a present-day example of an island arc, the volcanic byproduct of a subducting oceanic plate.

Eventually, continuing subduction and resulting volcanic activity may have completely welded the islands of Avalonia onto the coast of Gondwana.  Then the rains and rivers of Gondwana would wear down the volcanic mountains of Avalonia and deposits of water-borne sediments would accumulate and harden to form new sedimentary rocks covering parts of the older volcanic landscape.  Traces of some of earth's very earliest multicellular water-dwelling life would potentially be preserved in these sedimentary rocks.  Avalonia began to separate from the edge of Gondwana in a rifting process that began about 490 million years ago, creating an ocean, the Rheic ocean, behind Avalonia as it departed. 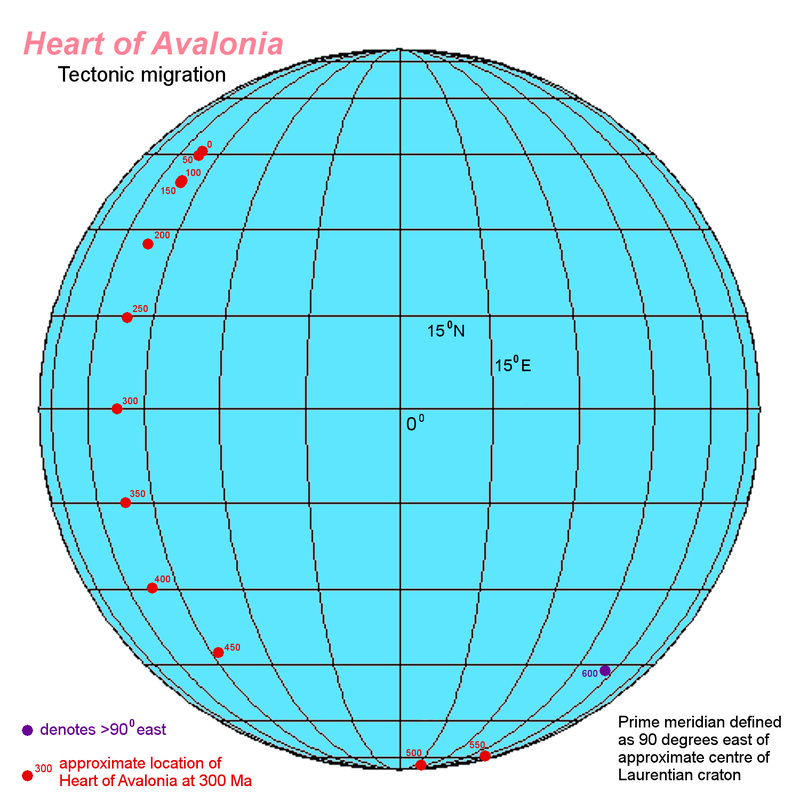 As Avalonia rifted away from Gondwana and migrated northward, it might have resembled in geographic shape and extent, the islands of modern-day Japan.  The now-vanished Iapetus ocean lay ahead, between Avalonia and the coast of Laurentia.  Laurentia was the proto-continent which, today, forms the bulk of North America.  About 430 million years ago, Avalonia began to collide with Laurentia, a process that ground on for maybe 50 million years, raising mountains along the coast of what is now north-eastern North America.  Following the amalgamation of Avalonia into Laurentia, other major land masses including the precursors to all the modern continents converged into a single supercontinent, Pangea.  Avalonia was crushed into an area near the geographic centre of the C-shaped Pangea.

For 180 million years, Avalonia remained land-locked within Pangea, far from the sea and possibly experiencing a warm or hot desert climate.  Then, 220 million years ago, early in the age of dinosaurs, the rifting of Pangea began to divide Avalonia into fragments which, today, are found scattered on both sides of the modern Atlantic ocean.   One fragment of the former Avalonian microcontinent remained welded to a section of strongly-crushed continental shelf rock, and thereby remained connected to the north-eastern continental land mass of  modern North America.  This fragment now includes the Avalon, Burin, and Bonavista peninsulas of the Canadian island of Newfoundland. 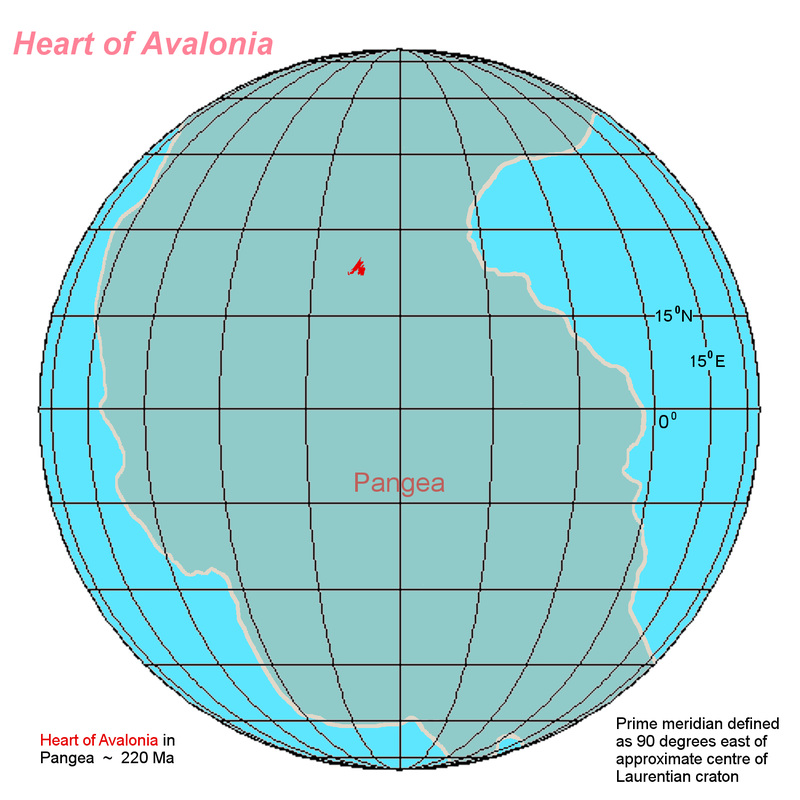 The northwest boundary of the Avalonian fragment in Newfoundland is formed by a line of deep faults extending through the earth's crust to the mantle and marking the ancient edges of the collapsed Iapetus Ocean.  The trace of the fault line extends on land from Hermitage Bay in the southwest to Dover in the northeast, interrupted in sections by large, deep intrusions of granitic rock.  The fragment of Avalonia bounded by the Dover-Hermitage Bay fault system and by the shores of the Atlantic Ocean may have once lain in a somewhat central geographic location within the original Avalonian microcontinent.   This possibly central fragment includes the Avalon peninsula, the peninsula for which Avalonia is named.  Most of the rocks of the Newfoundland section of Avalonia have been stripped by glacial action and other erosion, down to the original rocks that constituted Avalonia in its time of formation at the edge of Gondwana.

The long-ago possibly centralized location within Avalonia, namesake peninsula, and well-exposed original rocks make it appropriate to designate the Newfoundland fragment which includes all land lying between the Dover-Hermitage Bay fault line and the Atlantic (along with associated coastal islands) as forming the heart of the former microcontinent of Avalonia, that is, the  Heart of Avalonia.