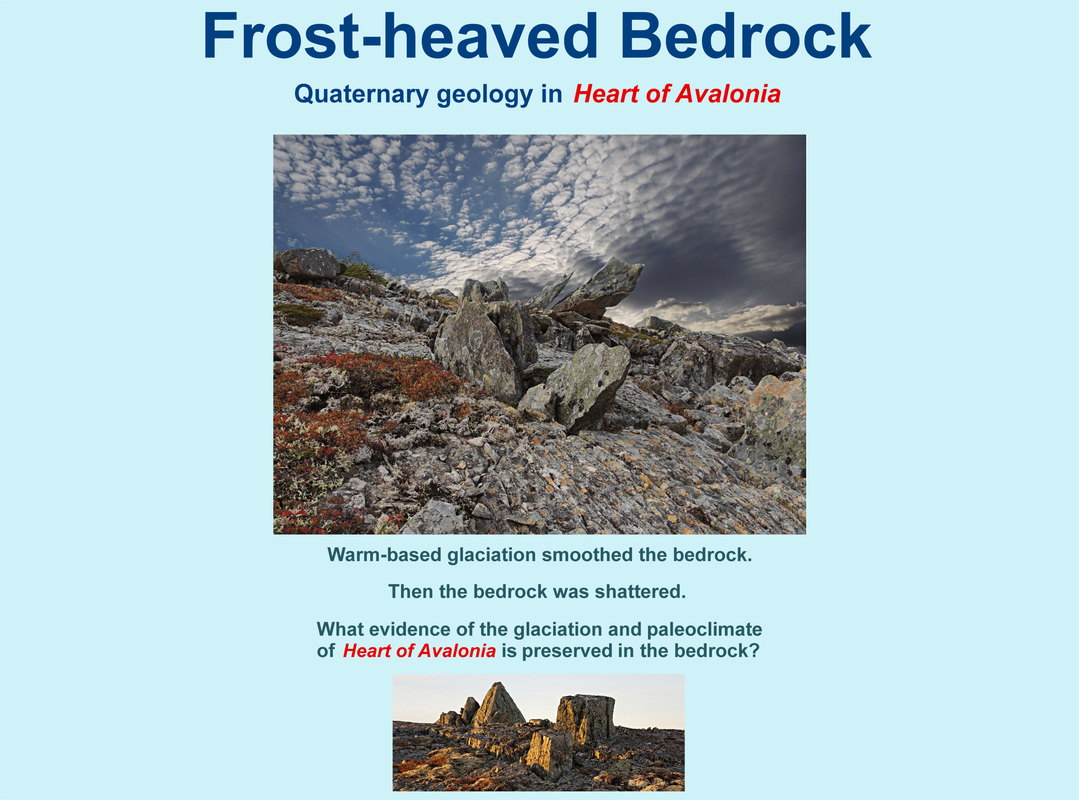 Welcome to the Frost-Heaved Bedrock field observations.  A wide variety of bedrock frost-heave features and related ice-disrupted bedrock features are found in Heart of Avalonia.  Many of these occurrences have been observed and documented and the collected results will be presented in this section.  The goal is to enumerate and describe frost-heave features seen in the field, to identify various causes for bedrock frost heave and then to investigate ice-disrupted bedrock as a potential paleoclimate indicator.

The paleoclimate of the Heart of Avalonia region includes geologically recent episodes of climate instability and abrupt climate change.   It has been determined that the earth's climate fluctuated severely and rapidly as the most recent glacial stage, the Wisconsin, transitioned to our current warm and stable interglacial, the Holocene epoch.  The essential clues pointing to the occurrence of pre-Holocene episodes of climate instability and abrupt climate change are as subtle as they are unmistakable.  For example, some of the best evidence is found in changes in oxygen isotope concentrations in deep Greenland ice cores.

The bedrock geomorphology of parts of Newfoundland's Avalon Peninsula provides a potential window for looking back 13000 years and seeing in shifted bedrock the dramatic impact of the climate instabilities that marked our not-so-distant past.
Work in Progress:  Evolution of Understanding
The Field Observations section "Frost-heaved bedrock" of  Heart of Avalonia  remains under development.  Field work for this section commenced in 2007.  Presentation of background material, field observations and preliminary interpretations began on this website in early 2016.  This is a large section and new material will be added regularly until an expected completion date around late 2020.  To introduce the topic, five short discussions have been provided to summarize some key concepts, early observations and conclusions.   Descriptions of the bedrock frost heave observations presented in the early stages of the project reflect initial interpretations based on an understanding that has subsequently evolved.   As work has progressed, several of the interpretations of the field observations have been significantly adapted or modified.   The presentation of updated material and supporting evidence from the field is currently well underway (December 15, 2019).  A regularly-updated Table of Contents with links to all recently included material is provided at the bottom of this page.  Some of the ongoing changes to the scope and direction of the frost-heaved bedrock project are outlined below.

As a result of continuing field observations recorded as this section was being developed, the scope of "Frost-heaved bedrock" has been expanded.  Specifically, increasing field evidence points to subglacial bedrock frost heave having occurred in several areas.   A new emphasis has thus been placed on determining  the specific processes underlying possible instances of subglacial bedrock disruption.  Observations suggest that many relict frost-heave features observed on the Avalon Peninsula could relate to hydraulic effects and glacial activity rather than the conventionally assumed ice segregation and periglacial activity.  Both the anticipated size and time frame for completion of this section have been adjusted  in light of the need for additional analysis and supporting observations.

Models used to explain observations of ice-induced bedrock disruption on the Avalon Peninsula within the Frost-heaved Bedrock project have been revised as the project has advanced.  The most recent models are described in the higher-numbered Technical Notes and in the higher-numbered Illustrative Features.  When the project is completed, out-of-date models presented in the earlier stages of the project will be identified as such, or updated.  Technical note 11 (added Apr. 26, 2017) introduces the Subglacial Ice Segregation/Cold Deglaciation (SIS/CD) model.  This model has been supplemented by the Subglacial Ice Plume model (added Oct. 17, 2017).  These models provide the basis for ongoing (October 2017 and forward) interpretation of field observations in the Frost-Heaved Bedrock section of Heart of Avalonia.

A second interim essay updates some of the key observations, interpretations and results completed as of mid-July, 2018.

Commencing in the spring of 2018, field observations have been supplemented by overhead photography to help investigate intermediate-scale (10-100 m) landforms for specific evidence of bedrock disruption by the mechanical action of cold-based glacial ice movement.  Convincing evidence now indicates that, contrary to the generally accepted view, cold based glacial ice moving in deformational flow can and does cause severe and large-scale erosion of bedrock.  When cold glacial ice deforms in creep above frozen bedrock, stress transmitted to the rock can disrupt and shift fragments of bedrock creating a violently eroded landscape.  The process appears to be enabled by groundwater approaching the cold glacier bed, freezing, and initiating bedrock failure.  Erosion of bedrock by the mechanical action of cold-based glacial ice is typically accompanied by the presence of frost-heaved bedrock monoliths and other artifacts of ice being extruded from the ground.  Observations supporting these interpretations will be presented on this website in coming weeks and months (note added Oct. 18, 2018).

As of Jan. 21, 2019, the material presented on the website is running about 1 year behind accumulated field observations for the Frost-heaved Bedrock project.  As a result, some interpretations being presented may appear to show incomplete observational support.  This situation should correct as more observations are documented.

Synthesis:
Mar. 31, 2019:  Two key generalizations can be used to help summarize observations of ice-disrupted bedrock and related phenomena observed on the Avalon Peninsula:
1)  The concept of bedrock erosion by subglacial ice extrusion can be used to include all erosion phenomena arising from groundwater penetration of subglacial frozen bedrock.  This erosion category includes the formation of characteristic grooved patterns on bedrock surfaces, the formation of small and large frost-heaved bedrock monoliths, groups of monoliths, some instances of bedrock frost heave with rotation, ice-wedged fissures and instances of chaotic bedrock disruption attributable to subglacial frost heave.
2)  The concept of cold glaciotectonic action can be used to include all bedrock erosion phenomena caused by stress transmitted to bedrock as a result of the deformation of glacial ice that is frozen to the ground.  This erosion category includes the formation of fissures by glacial ice drag on low-sloping surfaces, bedrock frost heave with rotation where the rotation is attributable to glacial ice loading, and disruption of bedrock on the lee side of slopes where reduced ice pressure, ice shoving and ice drag combine to create features resembling plucking.  Plucking by warm-based glaciers is not included.
Within the context of the above generalizations, all ice-disrupted bedrock described in the Frost-heaved Bedrock Field Observations section of Heart of Avalonia can be attributed to an appropriately weighted combination of bedrock erosion by subglacial ice extrusion and cold glaciotectonic action.

A comparison of possible glacial conditions in the Martian past with those on the Avalon Peninsula at the end of the Younger Dryas has been added (Martian Paleoglaciology, June 2021).  This comparison is based on observations made at Gale Crater by NASA's Curiosity rover. 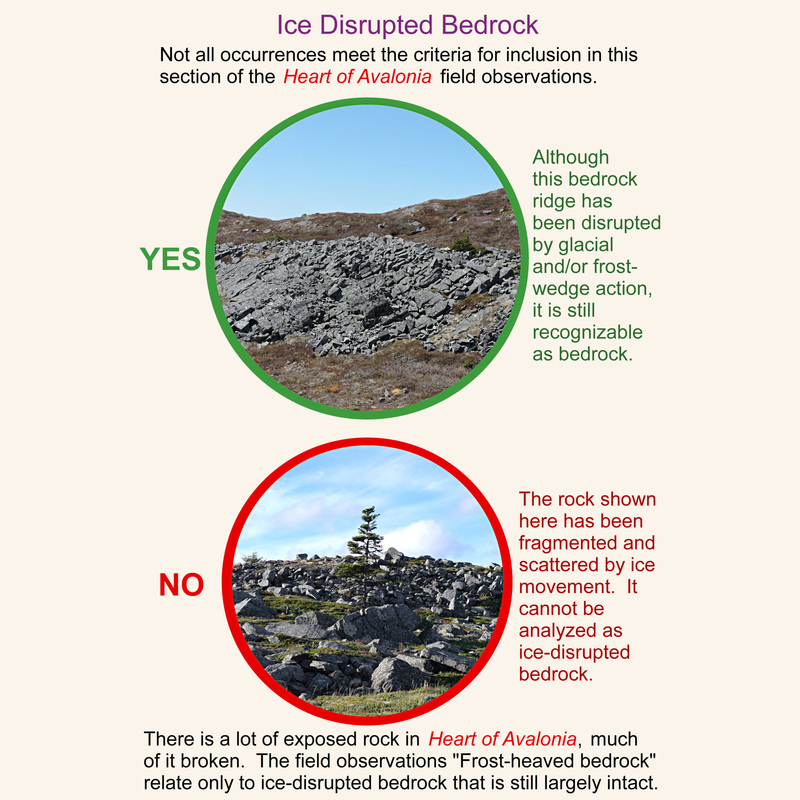 Table of Contents:
Disruption of bedrock by ice: Background


Timing of events and climate