The following summary of rock units comprising the Heart of Avalonia region is intended to help in interpreting the field observations presented on this site.  Extensive geological mapping of the entire region has been carried out by geologists over the past several decades. The results of this work are largely available online.  Publicly available geological maps define the conventional names (usually place names) which have been applied by researchers over the years to formations (stratigraphically related rocks) and groups of formations.   These same names are used here in most instances.  However, sometimes more general geographic descriptions will be used when appropriate, and some formation names will be omitted or consolidated  with others so as to simplify descriptions in the field observations.


Proceeding generally from west to east:

The fault zone itself is quite narrow, usually 1-2 km in width and includes rocks that are typically highly metamorphosed, this being their defining characteristic.  These rocks include migmatites, mylonites, gneisses and schists that might originally have been plutonic, subaerial volcanic or sedimentary rocks.  On the northwestern side of the fault, outside the Heart of Avalonia region, rocks are more highly disrupted by tectonic action than are the Avalonian rocks on the southeastern side.  These northwestern rocks comprise a melange, a region of rocks so severely broken, deformed, metamorphosed or partially melted that much of the information regarding their origin has been obliterated.  The rocks on the southeastern (Avalonian) side are less altered and have often preserved important elements of their history, even within a few kilometres of the fault line.  Several plutons lie close to or on the fault line, these often postdating the formation of the fault.  Most notable is the Ackley Granite, a huge pluton straddling the fault along almost the middle third of its length and dating from a period after the fault had formed and become inactive.  Although the Ackley granite extends well into the Heart of Avalonia region,  its rocks did not form part of the microcontinent of Avalonia. 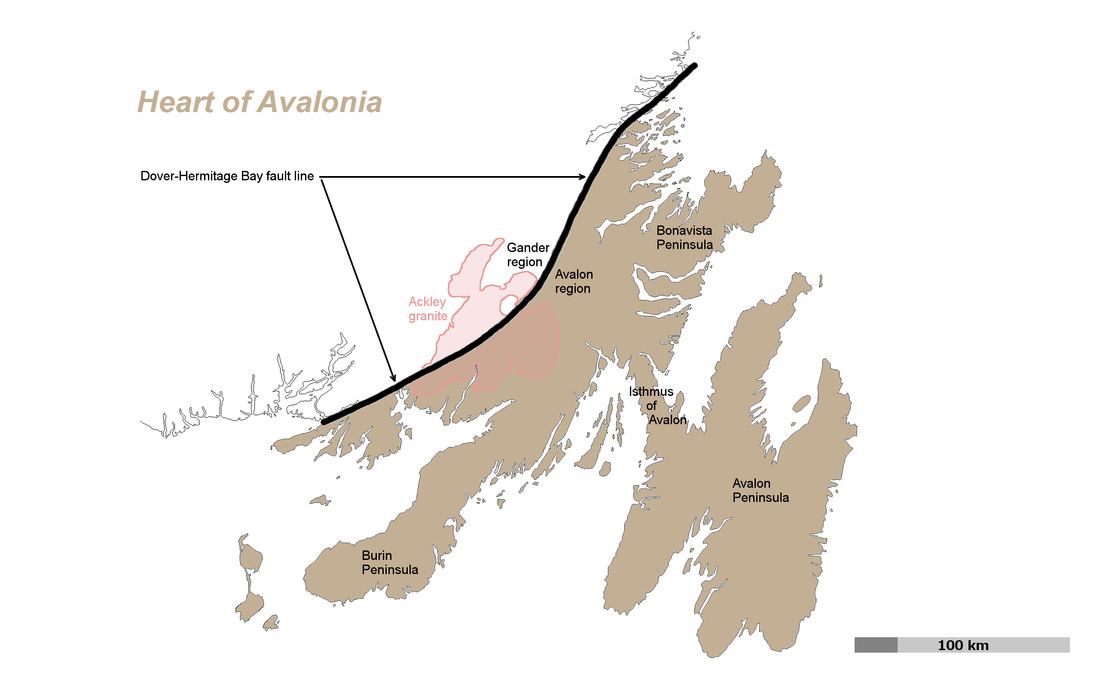 Rocks on the Burin and Bonavista Peninsulas:

The Burin Peninsula, extending southwest roughly parallel to the Hermitage Bay fault is comprised mainly (approx. 2/3 area coverage) of metamorphosed subaerial volcanic rocks (Marystown Group, ~575 Ma).  On the northwestern tip of the Burin Peninsula is a significant area of sedimentary rock which includes fossiliferous beds crossing the Ediacaran-Cambrian (542 Ma) boundary, the only region of Heart of Avalonia where conforming rock layers cross this period boundary.  Along the southeastern edge of the peninsula is a small band of mainly submarine volcanic and plutonic rocks (Burin Group, ~760 Ma) that were formed on the ocean floor off the coast of Rodinia and are some of the oldest rocks in Heart of Avalonia.  The rocks on the Bonavista Peninsula, extending northeast roughly parallel to the Dover Fault, are mainly Ediacaran sedimentary rocks, belonging to the Musgravetown Group (alluvial, northeastern end of peninsula) and the Connecting Point Group (marine, base of peninsula).  Important Ediacaran fossils have been found along the coast of the northeastern Bonavista Peninsula.


Rocks on the Isthmus of Avalon:

The Avalon Peninsula is connected to the Island of Newfoundland by a narrow isthmus 5 to 15 km wide and about 45 km long.  The rocks on the isthmus are about half subaerial volcanic (Bull Arm Formation, 550-570 Ma) and half sedimentary.  The sedimentary rocks on the northwest end of the isthmus are older marine Ediacaran-period rocks (Connecting Point Group), while the remaining sedimentary rocks are younger alluvial and fluvial Ediacaran-period rocks (Musgravetown Group).  The Bull Arm Formation rocks comprise a diverse mix of volcanic flows, tuffs and ignimbrites, including large areas of mafic (mantle derived) and felsic (crustal derived) rock.  The rocks on the isthmus are particularly accessible because conditions of harsh weather, poor soil formation and poor soil chemistry, along with extensive glacial-period erosion have left large rocky areas relatively free of trees and other obstructing vegetation.  Bedrock outcrops and coarse glacial till are abundant and extensive in area and the isthmus is narrow enough that most regions are not too far from roads or trails.

Most delineated rock units in Heart of Avalonia do not cross an imaginary boundary line extending approximately north to south as illustrated in the map below.  While this boundary line may or may not have geological significance, the line is convenient in referencing the locations of the commonly named rock groups and formations, almost all of which tend to lie solely in one section or the other. 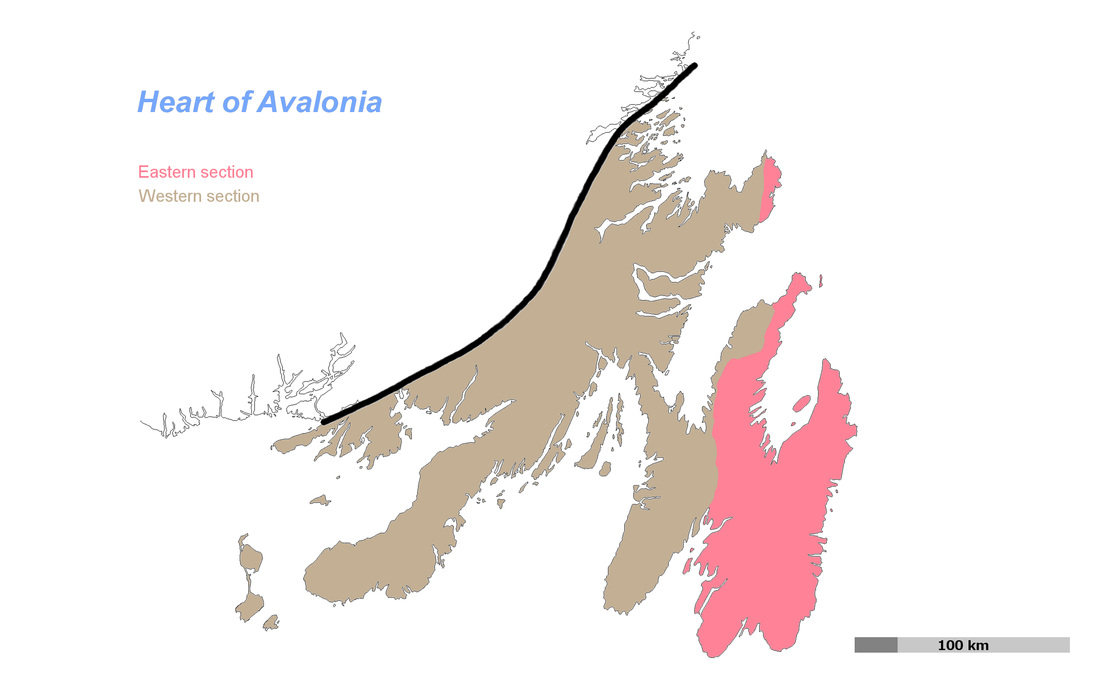 Rocks on the Avalon Peninsula:

The majority (about 3/4) of the Avalon Peninsula is covered with Ediacaran sedimentary rocks in three groups, Conception Group (oldest, marine), St. John's Group (intermediate age, alluvial) and Signal Hill Group (youngest, alluvial, fluvial).  One formation, the Drook Formation of marine sedimentary rock occupies about a quarter of the Avalon Peninsula.  Abundant, diverse and important Ediacaran fossils have been found in the Mistaken Point Formation, a marine or shallow-marine sedimentary formation widespread on the Avalon and stratigraphically overlying the Drook formation.  Fossils have also been found in St. John's Group rocks (Fermeuse Formation), while the widespread and often well exposed Signal Hill Group rocks have generally not yielded fossil discoveries.  St. John's Group and Signal Hill Group rocks dominate the large sub-peninsula extending north from the central Avalon and these sedimentary rocks are often well exposed in the highlands of this area.   A large area of Bull Arm Formation volcanic rocks occurs in the southwestern region of the Avalon, but these rocks lie mainly under forested terrain.