Phyllo comes from the Greek meaning leaf, while silicates are a broad class of minerals which include the majority of the important rock-forming minerals.  In most silicates, strong silicon-oxygen (Si-O) covalent bonds form the primary framework of a 3-dimensional crystal matrix, which then incorporates other elements (aluminum, magnesium, iron, etc.) to give the mineral its defining composition and characteristics.  In phyllosilicates, the silicate matrix is 2-dimensional in character, yielding minerals that crystallize in sheets (or “leaves”).  This feature can strongly influence the morphology of rocks and landscapes where phyllosilicates are abundant.

When a rock is composed of small grains of phyllosilicate minerals that are randomly oriented, the rock may not show a platy texture or peal apart on well-defined cleavage planes like mica (a phyllosilicate) does.  In pottery made from kaolinite (a phyllosilicate), the individual microscopic grains are aligned randomly.  Phyllosilicates can become especially significant in affecting the large-scale characteristics of rocks when their crystals become non-randomly aligned, either at the time the rock was formed, or by metamorphism after the rock was formed.  In slow-cooling igneous rocks (granite, pegmatite), large crystals of phyllosilicates may form directly from the melt.  In sedimentary rocks, depositional processes can align small phyllosilicate crystals, usually forming layers aligned at right angles to the direction of settling and subsequent compression of the sediment.  Metamorphism, involving subjecting rock to enough heat to weaken chemical bonds and sufficient deviatoric stress (total stress minus hydrostatic stress) to distort and reorient crystals is a key agent in producing rocks with preferentially aligned phyllosilicate grains.

All phyllosilicates include a layer of strongly bonded silicon-oxygen tetrahedra (tetrahedral layer) with 3 of the oxygens lying on a basal plane in a hexagonal configuration (usually centered by a hydroxyl (OH) anion) as illustrated below. 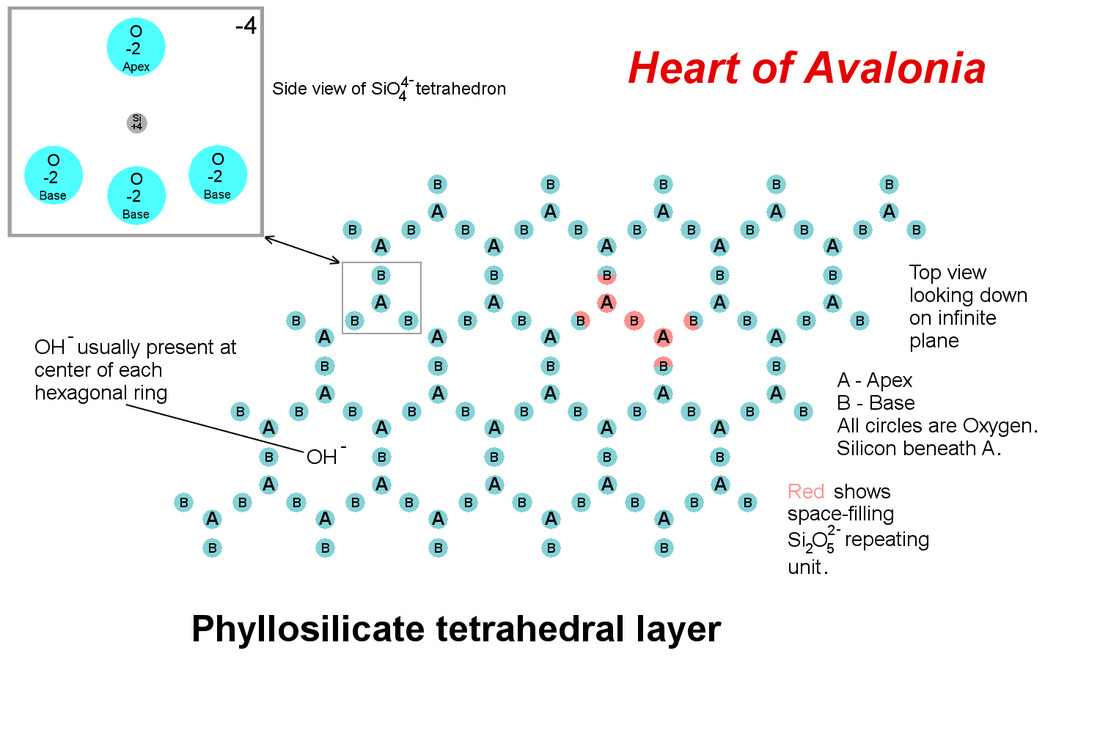 The basal oxygens do not interact or bond strongly below the basal plane, giving rise to the essential 2-dimensional nature of the phyllosilicate crystal structure.  The fourth tetrahedral oxygen (apical oxygen) extends above the basal plane and is available for sharing in the crystal structure of  an octahedrally coordinated matrix of anions (oxygen or hydroxyl) lying above and strongly bonded to the tetrahedral layer.  The octahedral layer contains cations of elements such as aluminum, magnesium and iron that, in part, give rise to the diverse list of phyllosilicate minerals.  The octahedral layer is illustrated below. 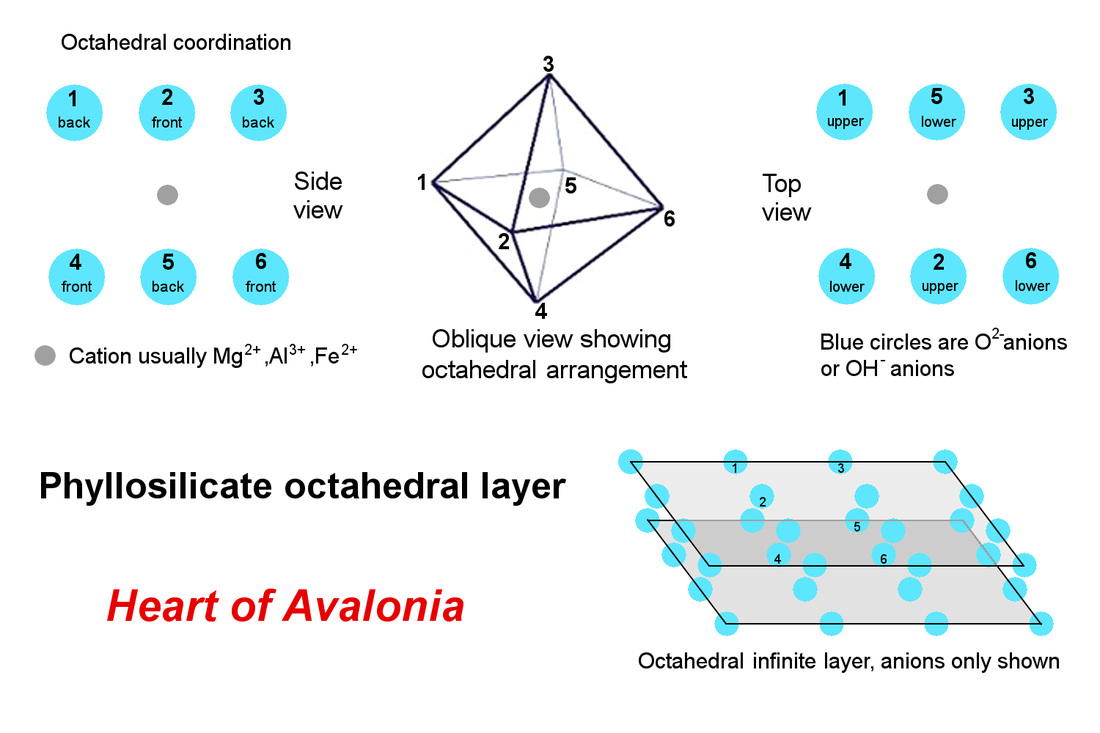 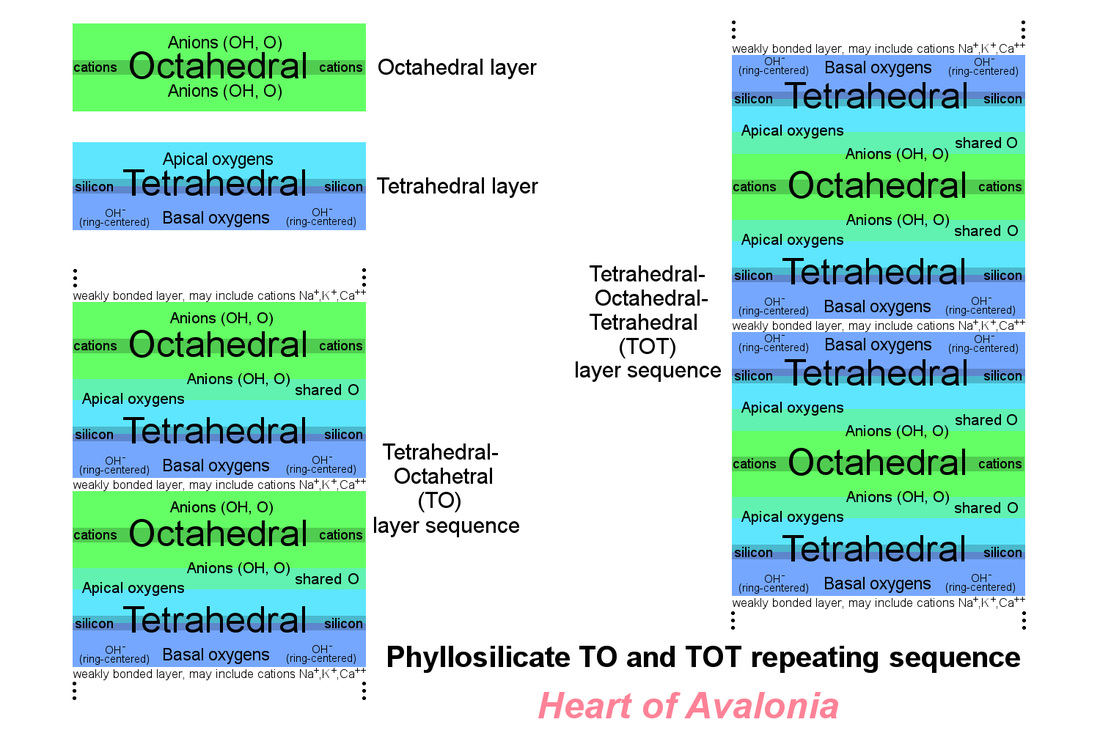 The lack of covalent bonding between the basal plane of the tetrahedral layer and any adjacent layer is what gives phyllosilicate minerals their cleavage or tendency to separate in parallel layers.  Other macro-crystalline minerals such as calcite or barite also demonstrate distinct cleavage along certain crystallographic planes, but these minerals are not as abundant in most rocks as are the phyllosilicates.  Phyllosilicates include micas (muscovite, biotite, others), serpentine (chrysotile, others), talc, pyrophyllite, chlorite, vermiculite and the clay minerals (kaolinite, bentonite, illite, many others).  Some phyllosilicate minerals are solid solutions and thus have a range of intermediate compositions. There are also variations of the more common phyllosilicate species that include less common cations like chromium and manganese.  The clay minerals are particularly important in petrology since clay particles comprise a large fraction of muds and silts and hence form the basis of many common sedimentary rocks.  Illite is the primary mineral group occurring in Ediacaran siltstones and mudstones.  Clay minerals can result from the weathering (hence hydration) of common igneous rocks like feldspar.  Serpentine minerals are formed by the hydration of mantle-derived igneous rocks such as olivine.

Pyhllosilicate minerals are found mainly in crustal rocks, not mantle rocks, and can be broken down (lose hydration) and converted to other minerals when a tectonic plate is subducted.  Volcanoes above a subducting plate can erupt phyllosilicate minerals formed by hydration of other minerals as hydrogen-rich rocks and water work their way upwards.  Phyllosilicates are a common result of metasomatism, or the metamorphism of rocks accompanied by chemical change, often in the presence of hot, pressurized water.  Hydrogen is a key mobilizer of minerals in tectonic, plutonic and volcanic processes.  All phyllosilicates are hydrogen-containing minerals. 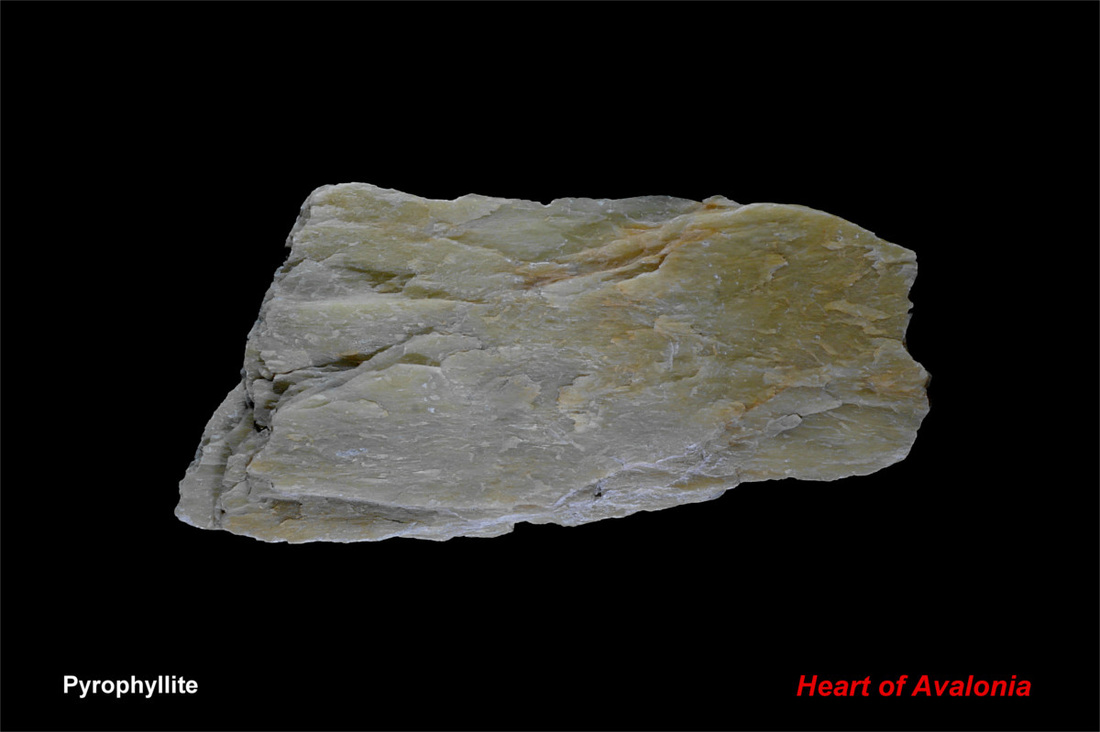