When rock is exposed to stress, it can deform elastically, as when a spring is stretched.  In this case there is no permanent deformation and when stress is released the rock will return to its original shape.  When stress exceeds the strength of the rock, a gradual, permanent shape change (plastic deformation) may occur, or the rock may fracture.  When a body of rock has pre-existing weaknesses, applied stress will tend to deform the rock in a way that takes maximum advantage of these weaknesses and the shape of the resulting deformed rock will significantly reflect the weaknesses as well as the applied stress.  Planes of weakness can be formed in rock by many processes, usually involving the application of stress.  The simplest example of a plane of weakness is a fracture or crack.  Some types of rock, most notably, rocks containing substantial amounts of phyllosilicate minerals, will develop internal planes of weakness (cleavage) in response to extreme or prolonged stress, or to stress accompanied by moisture and/or elevated temperatures.

Joints are fracture planes in bedrock where there is little or no separation between opposing faces and little or no sideways movement.  When movement occurs along a joint, it is termed a fault.  Rock cleavage describes closely spaced planes of weakness in rock which may be totally invisible (visible metamorphic layering is called foliation), but which will readily give rise to joints when exposed to tensile stress or internal hydraulic pressure.  Joints are a common feature of bedrock everywhere, while rock cleavage is common in rocks containing aligned crystals of phyllosilicate minerals or other minerals with aligned weakly-bonded layers in their crystal structure.

In the field, planar exterior surfaces or planes of internal weakness such as joints or cleavage in bedrock are geographically described according to their strike and dip.  Strike is the compass direction of the theoretical waterline if a planar surface were extending out of a body of water while dip is the angle of descent of a theoretical stream of water flowing down the plane.

Joints and cleavage contain information about the history of a body of rock and also provide information about the future tendency of the rock to succumb to weathering and erosion.  The rocks of Heart of Avalonia often possess cleavage resulting from the tectonic history of this region and the consequent regional metamorphism which strongly affected the entire area.  Joints and systems of joints are the visible result of  tectonically induced weaknesses in rock and/or of the forces deforming the rock over the time from its initial formation to the relatively recent episodes of glaciation and the ongoing effects of moisture penetration and frost wedging.

Cleavage itself may not be visible, but joints formed on cleaved planes are highly visible, as are the flat, oriented surfaces left behind as rock is broken along planes of weakness and the broken rock then removed by the action of water, ice or gravity.  Often, joints are seen in bedrock that either possesses no obvious cleavage or where the joints cut across the cleavage planes.  It can be more difficult to determine the origin of the joints in this case.  Sometimes, joints follow bedding planes in sedimentary rock, for example, where weaker layers are interspersed with stronger layers.  Joints on bedding planes can frequently be interpreted as following cleavage planes where the rock retains aligned phyllosilicate mineral grains (as in shale) from its time of deposition.  In other instances, systems of joints result from the thermal contraction of solidified igneous rock (for example, the hexagonal jointing in columnar basalt).  Tectonic stresses and the forces on rock resulting from burial, then removal of overlying rock by erosion, can also produce joints even where no underlying cleavage is present, as can the effects of ice loading and unloading during and after glacial periods.

The following illustration shows the tendency of crystal grains (usually phyllosilicate grains) possessing strength in two dimensions but lacking strength between layers, to align under the influence of stress.  Under hydrostatic (symmetric) stress, as in deep rock burial, volume is reduced but no alignment takes place.  Under uniaxial stress, as in uniform tectonic compression, grains will align or minerals may recrystallize to produce preferred alignment of planes of weakness at right angles to the axis of the applied stress (direction of tectonic compression).  The entire body of rock is then prone to developing cleavage, or, under subsequent tension, joints, normal to the stress direction. 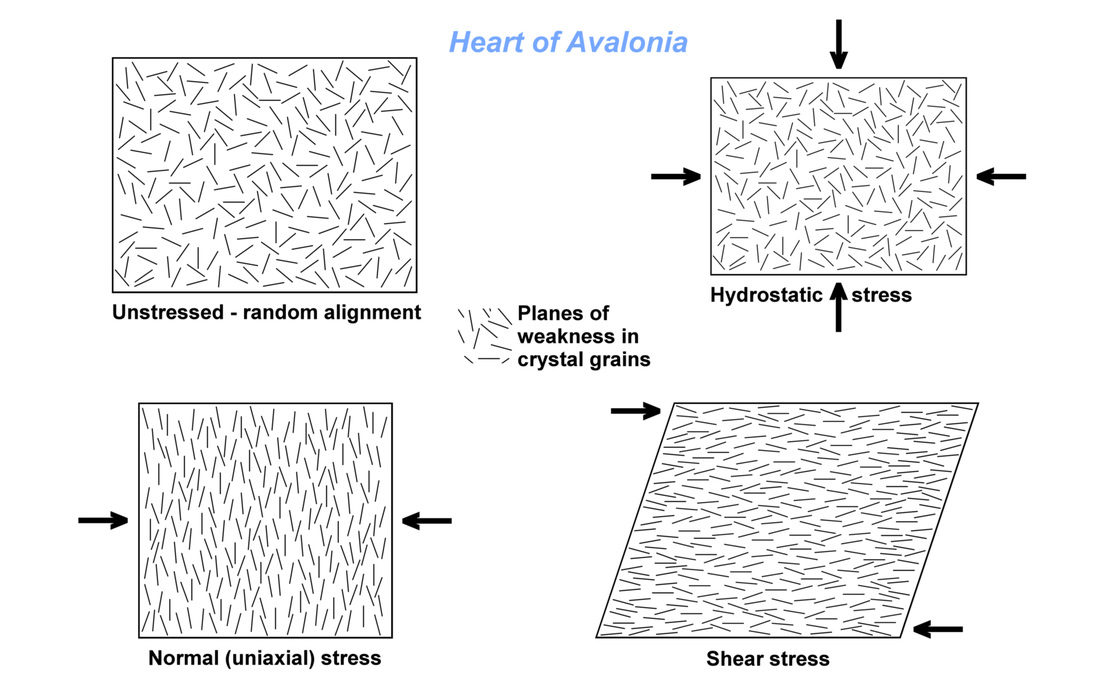 Shear stress can produce a more complex alignment of granular planes of weakness, but, as illustrated in the bottom right panel, the tendency is for weaknesses to line up so as to facilitate slippage within crystal grains in a manner that relieves the shear stress.  When slippage occurs the rock undergoes an irreversible strain in response to the stress and the resultant region would be more properly termed a fault than a joint.  If fracturing does not occur and the deformation is ductile, a shear zone is formed.  Joints may readily form in sheared rock after the fact, exploiting the weaknesses (cleavage) induced during the prior shear strain and consequent crystal alignment.

The top diagram in the following illustration shows the development of stress and consequent strain in rock folded into an anticline (similar analysis holds when a syncline is formed).  Shear strain can result from the continuous adjustment of rock to the increasing radius of curvature (hence circumference) toward the top of the fold.  As well, tensile stress can arise in the upper portion of the rock which is, in effect, stretched to accommodate the bending.  Where the initial compression of the rock  during commencement of folding has caused alignment of planes of weakness, a multiplicity of parallel joints can appear in the upper parts of the fold in response to tensile stress.  The second diagram in the illustration below shows shear strain developing in a body of rock undergoing differential compressional strain as a result of varying stress or varying  resistance of the rock to compression.  Faulting, shearing or crystal grain alignment leading to a plane of weakness normal to the direction of compression can occur as illustrated. 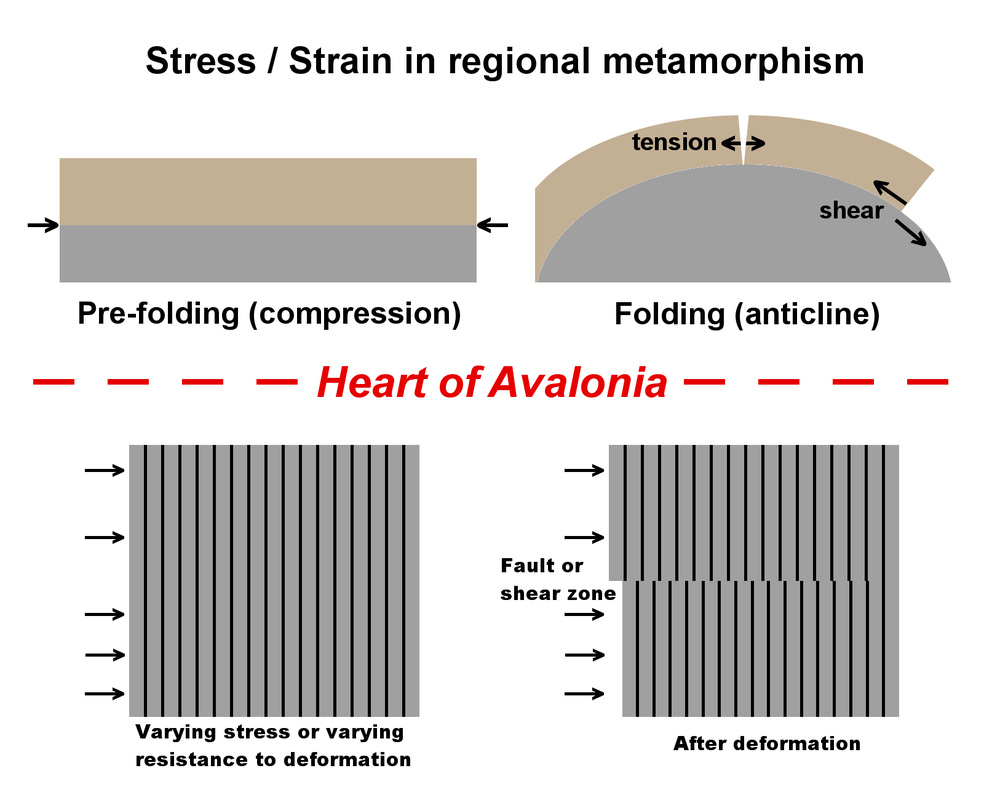 Hydraulic pressure, particularly in an area that has been deeply and repeatedly glaciated as is the case with Heart of Avalonia, is a key source of tensile stress that will exploit planes of weakness to produce joints and separated joints in rock possessing tectonically-induced cleavage.  When a deep mass of ice rests on rock or is pushed against rock by glacier flow, water at the base of the ice is forced into cracks and penetrates deeply into cleavable rock, inducing what amounts to tensile stress.  Cycles of frost wedging during or after glaciation can enhance this effect nearer the surface. 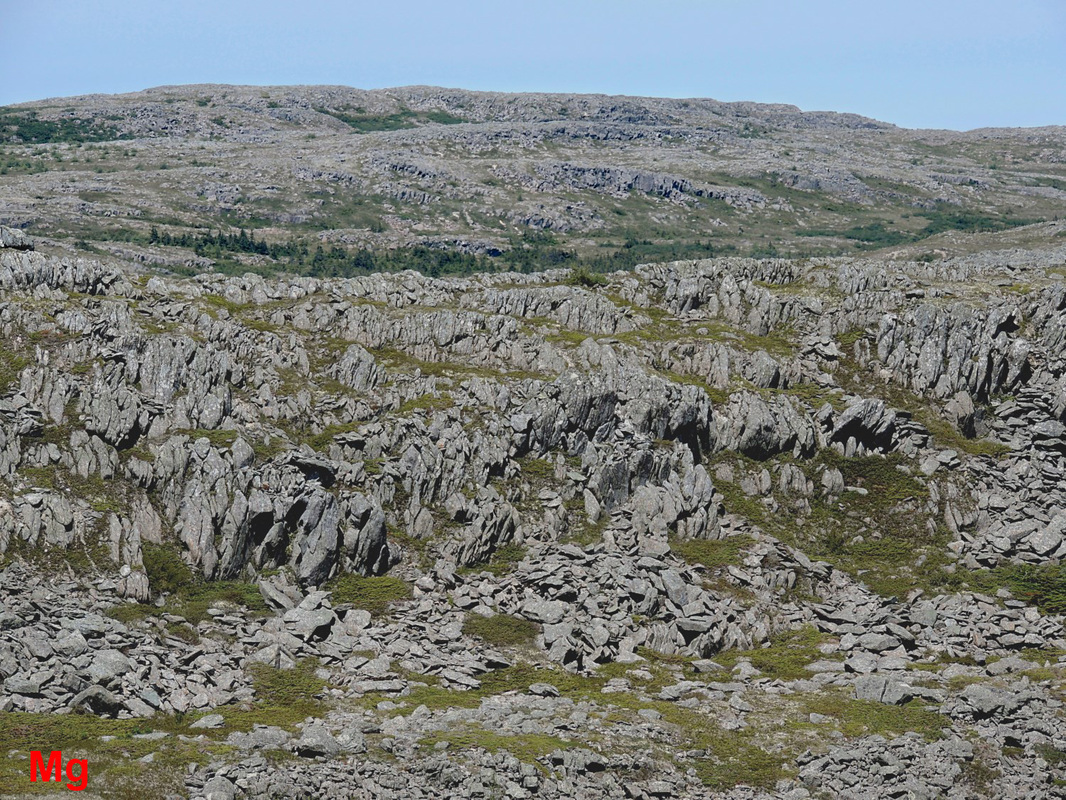