The geographic region,  Heart of Avalonia, is commonly known in the geological literature as the Avalon Region of Newfoundland or the Avalon terrane.  A terrane is a detached section of a tectonic plate that has relocated and eventually joined onto a different plate.

Heart of Avalonia, as represented by the rocks of southeastern Newfoundland, is an intricate assembly of igneous, sedimentary and metamorphic rocks of intermediate age.  Within the region, there are few sedimentary rocks younger than about 480 million years, the time at which the Avalonian microcontinent became separated from the sediment-bearing rivers of Gondwana.  A few late-forming plutons and igneous dykes are present that post-date the collision of Avalonia with Laurentia, but even these intruding rocks are seldom younger than 400 million years.  The oldest rocks of the region are sections of sea floor pushed up onto the Rodinian continental margin and date from about 760 million years ago.  The rocks now exposed in Heart of Avalonia thus span an approximate age range of 360 million years out of earth's 4.54 billion year history as a planet (8% of total geological time).  The rocks at the midpoint of age between the oldest and youngest (dating from 580 million years ago) have existed for a time interval a bit less than 13% of the age of the earth. 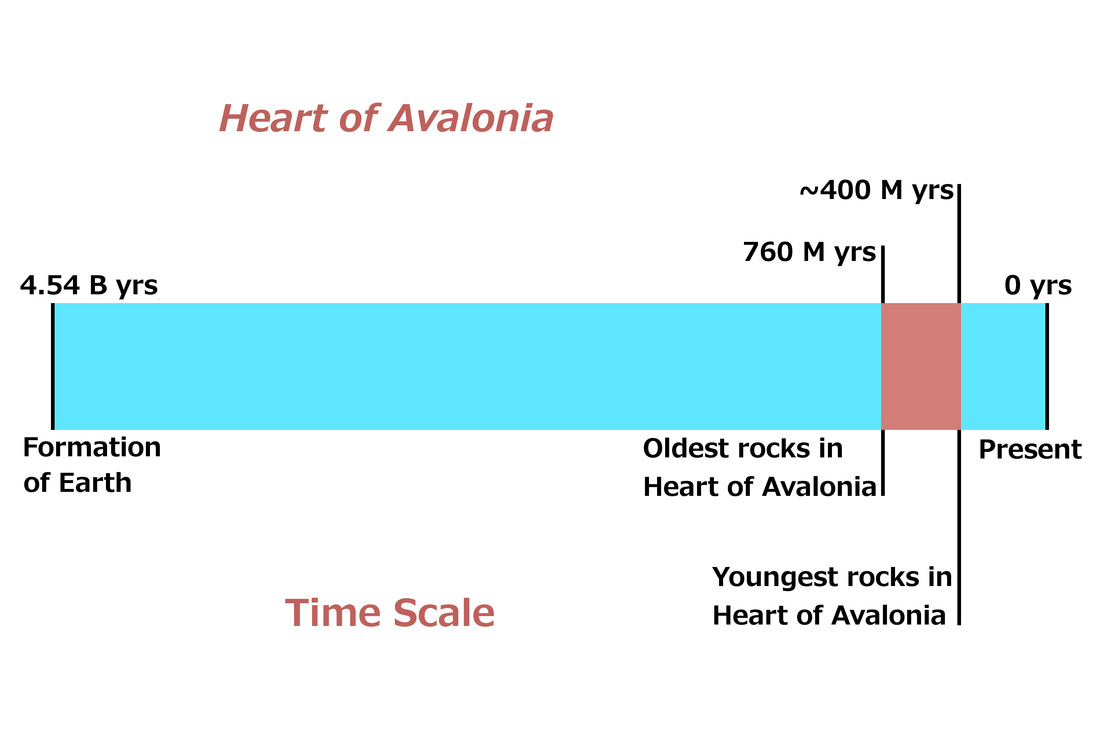 Most of Heart of Avalonia is covered with sedimentary rocks formed during the Ediacaran period of earth history.  The Ediacaran period (630 Ma to 542 Ma) is named after the Ediacara Hills (Flinders Range), north of Adelaide, Australia.  Fossils found in the Ediacara Hills showed primitive water-dwelling organisms that predated the evolution of hard body parts (bones, teeth or shells) and are thus rarely preserved.  Eastern Newfoundland has yielded some of the best and most scientifically significant Ediacaran fossils found anywhere on earth.  Most of the sediment carried onto what is now southeastern Newfoundland was derived from the eroded rocks of Gondwana.  There is some debate as to which continental core (craton), that of modern-day South America or that of modern-day Africa was adjacent to Avalonia in Ediacaran times.  These two cratons, Amazonia and West Africa were merged together as part of Gondwana during the Ediacaran period.

It is likely that fast-moving rivers carrying vast volumes of water over long distances fed sediment to the lowlands of Avalonia.  Sedimentary beds in Heart of Avalonia are sometimes kilometres thick and some of the beds show patterns formed by fast-flowing rivers.  There are also areas of sedimentary rock formed in lake, delta, shallow marine and deep-sea marine environments.

Most of the Ediacaran sedimentary rocks of southeastern Newfoundland do not show fossils.  There are several reasons for this.  Firstly, the abundance of complex, multicellular life in Ediacaran times is uncertain and most life might have been microscopic for most of the period.  Secondly, Ediacaran fossils represent very small changes in the properties of the rocks in which they are embedded.  Thus they typically don't stand out much (imagine what the fossil of a jellyfish might be like) and would be invisible except in rare cases where they are preserved at a boundary between two differing rock types, or where they are delicately etched out by moving water over hundreds or thousands of years.  Thirdly, tectonic crushing of Avalonia into Pangea after the Ediacaran period caused regional metamorphism of the sedimentary rocks.  This metamorphism realigned the crystal structure of most sedimentary rocks, causing the rocks to break at angles unrelated to the original bedding (bedding refers to layering formed when the sediment was deposited).  This crystal realignment and resulting foliation or rock cleavage can obscure or obliterate fossils and fossil-bearing surfaces.  Finally, fluvial or moving-water conditions can erase fossil traces in sand or silt before the material converts to rock (induration). The rock-forming process can take hundreds of thousands or millions of years.   In spite of all this, many good Ediacaran fossil sites have been found, mostly along the coast where steady erosion by the sea has gently etched the fossils into visible existence.  The first Ediacaran fossils ever found, Aspidella Terranovica were found in rocks in downtown St. John's (capital of province of Newfoundland and Labrador) and in surrounding areas in the late 1800's, but it was many years before the true nature and significance of these fossils  (at first thought to be pseudo-fossils) were recognized. 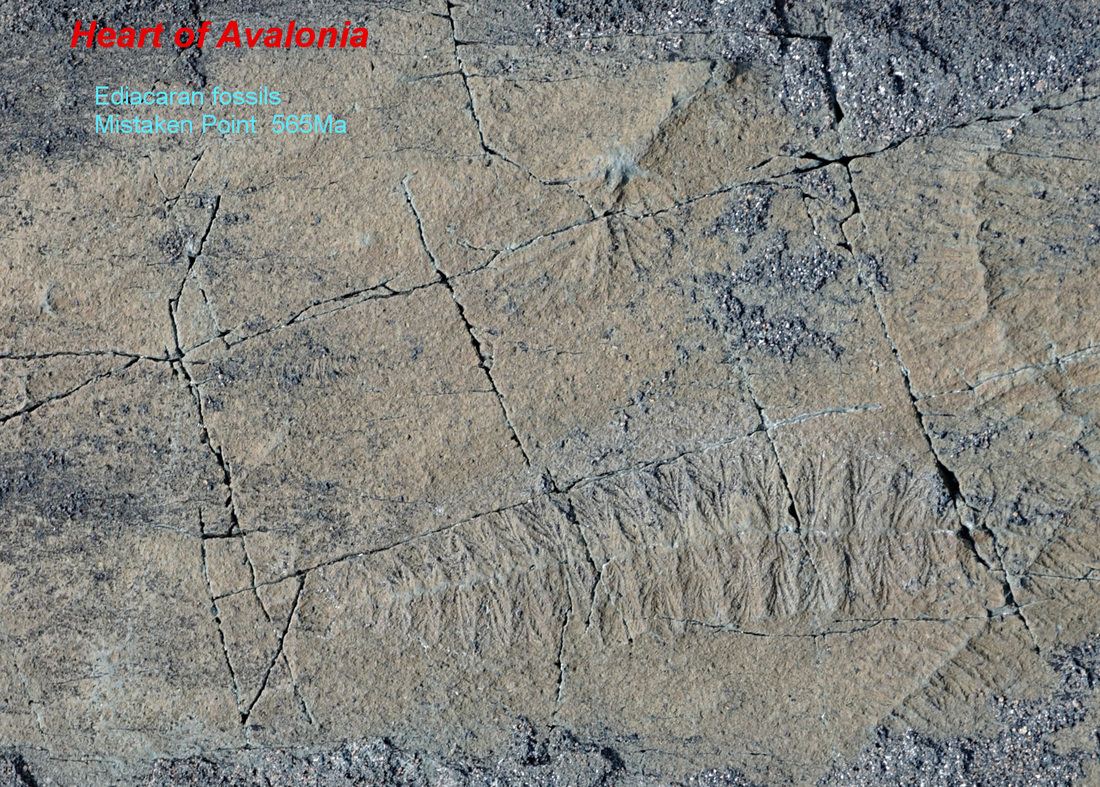 Two large, but geographically distinct, sections of the Avalon region of Newfoundland are dominated by igneous rocks.  These igneous rocks are for the most part either intrusive, that is, formed from magma cooling below the surface (plutonic, granitic) or else subarial volcanic (magma expelled from volcanoes or fissures above dry ground as lava, tuff or ignimbrite).  Ignimbrite (derived from “fire-rain”) is formed from hot rock, ash and lava violently ejected in a volcanic explosion.  The volcanic activity in Heart of Avalonia is Ediacaran or earlier (more than 550 Ma) and much of it was related to the formation of the Avalonian microcontinent by subduction processes at the Gondwanan margin.  In spite of their substantial age, many of the igneous rocks of Heart of Avalonia are remarkably well preserved and they demonstrate almost every volcanic process imaginable.  The regional metamorphism affecting virtually all of southeastern Newfoundland is low-grade in many places and the metamorphism has left some igneous rock types little modified, due either to their composition or their location or both.  There is some post tectonic (less than 410 Ma) plutonic rock lying on the Avalonia side of the Dover-Hermitage Bay fault line.  This rock noticeably lacks the characteristic rock cleavage imposed by regional metamorphism.

Regional metamorphism in Heart of Avalonia becomes more pronounced with close proximity to the Dover-Hermitage Bay fault line.  The fault itself represents the boundary between crustal rock of the Avalon region and highly-deformed continental-edge rock of the adjacent Gander region and also represents the former Avalonian coast of  the now-collapsed Iapetus Ocean.  Avalonian rock southeast of the fault line was stressed in both compression and shear as Avalonia was crushed obliquely into the Gander region during the Acadian orogeny.  The resulting compressive and shear stress, along with associated heating of the rocks, was sufficient to metamorphose rocks near the fault to mica schist, mylonite, or gneiss.  When the fault closed in oblique compression, there was a period of slippage along the fault during which the Avalon region moved southwest relative to the attached Gander region.  This strike-slip action along the fault (similar to the motion in the modern San Andreas fault in western California) contributed to further metamorphism of the surrounding rocks and to the creation of a highly metamorphosed shear zone in the immediate vicinity of the fault.

Farther back from the fault, rocks have been metamorphosed to a lesser degree, sometimes yielding  greenschist or other schistose or foliated rocks and then, back further still, slate and rocks with slaty cleavage.  Most of the rocks of Heart of Avalonia show rock cleavage.  For the most part, the cleavage planes have developed at right angles to the axis of compressional stress and thus the cleavage planes tend to be steeply sloping or vertical and to trend horizontally (strike) with the Dover-Hermitage Bay fault line.  These cleavage planes are planes of weakness leading to repeating parallel joints (cracks) in large volumes of rock which can then fail in glacial loading, frost wedging and erosion.  Tectonically aligned planes of rock failure help shape the hills, valleys, lake shores and coastline of Heart of Avalonia.

The rocks of southeastern Newfoundland have been folded by compressional tectonic stress into a series of synclines (initially flat layering bent concave upward) and anticlines (initially flat layering bent concave downward) extending from the Dover-Hermitage Bay fault line to the eastern edge of the Avalon peninsula.  Like the aligned rock cleavage, the folds in the rock, having axes also aligned with the fault, help contribute to the accordion-like geomorphology of Heart of Avalonia.  The undulating pattern of synclines and anticlines contribute to repeating strip-like surface exposures of layered rock units, the surface-exposed strips generally running in alignment with the Dover-Hermitage Bay fault. 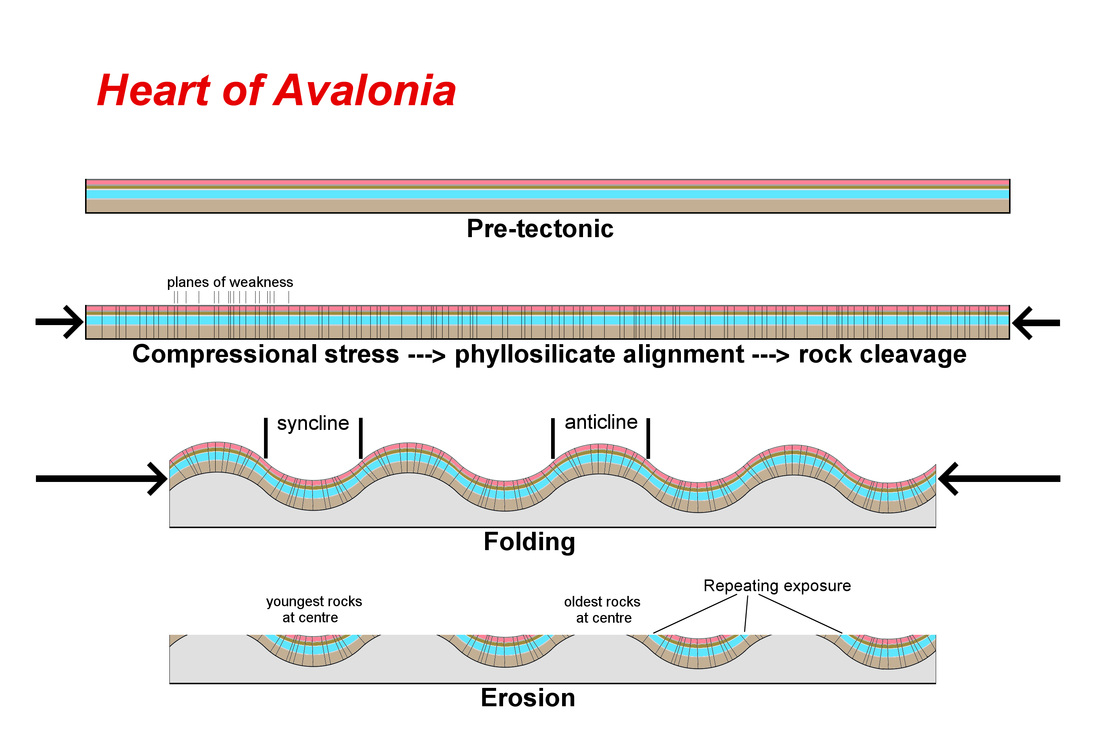 Heart of Avalonia has been repeatedly covered with glacial ice in recent geological time (last 800,000 years) and presumably has experienced glaciation many times before that, going all the way back to Avalonia's initial formation at deep southern latitudes.  There is evidence of glacially eroded rock dating from the Ediacaran period (Gaskiers glaciation) this rock possibly hinting at a global glaciation interval (snowball earth or slushball earth) 580 million years ago.  Glacial erosion dramatically alters the landscape of glaciated areas, but each successive episode of glacial erosion tends to erase most traces of previous episodes.  The Wisconsin Glacial Episode, extending over a time period of 110,000 years (time definitions for this Episode vary), left southeastern Newfoundland under ice for most of the duration, even as major North American ice sheets advanced and retreated multiple times.  The Wisconsin began and ended with relatively short intergalcial (warm) periods, one of which remains in progress at the present.

The most recent northwest-Atlantic glacial interval, beginning about 120,000 years ago, peaking about 22,000 years ago and ending on the Avalon Peninsula about 10,000 years ago (this last glacial interval hasn't yet ended in Greenland) shaped the present-day landscape of Heart of Avalonia.  Although the majority of the region is now covered by boreal forest, there are large areas where forests have either burned off and not regrown or where trees have been unable to gain a foothold because of tough climatic conditions or poor soil conditions.  The treeless areas or barrens provide enhanced visual access to the underlying geology and dramatically reveal the impact of glacial erosion.  The geomorphology of many of the rocky hills and barren areas of Heart of Avalonia would fall in the category of paraglacial geomorphology, that is, landforms in transition between  glacial conditions and non-glacial, non-permafrost conditions.  There is no permafrost presently existing in southeastern Newfoundland, although permafrost conditions undoubtedly existed throughout portions of the Wisconsin interval.

Glacial relics of many types are abundant and plainly visible in non-forested areas. These include erratic boulders (rocks shifted by ice flow), bedrock striations (lines or grooves gouged by moving ice), large areas of till (rough, poorly sorted, rock debris deposited by ice), streamlined bedrock forms and prominent glacially-shaped hills and valleys.  There is a strong interplay between tectonic (metamorphic) weaknesses in bedrock (rock cleavage) and erosion by ice motion, plucking and frost wedging.  Plucking refers to the process of glacially pressurized meltwater entering and seeping  through cracks in rock, then refreezing, expanding and breaking rock at a nearby or distant external rock-face.  Sometimes, entire hills have a shattered appearance where repeated freezing and thawing of moisture in innumerable parallel rock-cleavage joints has broken and separated the bedrock.  Often, moving ice has exploited planes of tectonically-induced weakness, carving out and carrying off large volumes of rock, leaving behind nearly-flat planes of rock on steeply sloping hillsides.  These strongly-tilted flat surfaces often culminate in sharp drop-offs or cliffs.

It is because of glacial action that the inland regions of Heart of Avalonia, as opposed to just the sea-eroded coastal cliffs, are subject to straight-forward visual geological analysis.  Much bedrock is exposed, either essentially bare or else covered only in moss or lichen, grass or low bushes.  Glacial till provides an abundant source of specimens for inspection, most of such specimens obviously existing in close correlation with nearby bedrock outcrops.